Rick Ball and the Boston Marathon 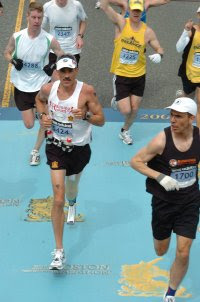 A popular Toronto Transit Commission subway mechanic hopes to set a world record for amputee runners when he takes part in the Boston Marathon tomorrow.

Rick Ball, a 43-year-old father of two from Orillia, Ont., began training as an amputee runner when he was first fitted with a carbon fibre prosthesis less than two years ago.

In the interim, Ball has managed to set the world record amputee marathon time squarely in his sights.

In July of last year, Ball ran a full marathon in only three hours and 10 minutes -- only six minutes off the current world record.

In fact, he qualified for this year's Boston Marathon in the able-bodied division.

"He's got a lot of ability. He's done amazingly well, I'll have to admit, in a short time," DePlancke told ctvtoronto.ca on Sunday afternoon.


BOSTON, April 20 /CNW/ - At 3:01:50, TTC Subway Mechanic Rick Ball has just posted the fastest time in world marathon history for a single leg amputee. Finishing in the top six percent of all runners in the 113th Boston Marathon, Ball beat the previous 3:04:00 record for a single amputee set by Australian Amy Winters at the 2007 Chicago Marathon.

Ball's time is now recognized by the International Association of Athletics Federations as the reigning world record for single leg amputee marathoners.


BOSTON GLOBE, April 21 - Ontario's Rick Ball, an amputee who aimed to break three hours in his first Boston Marathon, just missed the mark, turning in a 3:01:50. But he nevertheless managed to set a world record for single leg amputees, dashing the 3:04 mark set by Australia's Amy Winters at the 2007 Chicago Marathon.

"It's so cool to have a world record at this course, the most prestigious in the world," said Ball, 43.

If it doesn't sound easy, that's because it wasn't. Ball, who lost his leg in a car accident more than 20 years ago, suffered severe dehydration and cramps and had to be treated by medical staff for more than an hour after finishing.

"Honestly, it was the hardest, most difficult thing I've ever done in my life -- harder than my accident, as far as the mental and physical pain," said Ball. "I just wasn't going to give up, though."
Posted by Mike at 5:05 PM