Golfing with the Sharks 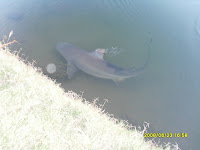 The truth really is stranger than fiction, especially when it comes to my post about golfing in Australia!

Apparently I made a mistake when I mentioned the man-eating crocodiles in the water traps: sorry, I should have said "man-eating sharks".

For those who thought I was exaggerating:
"WATER hazards tend to make a golfer shake at the knees at the best of times, but Carbrook Golf Club has taken this element of fear to a whole new level. The course’s main lake is now officially a no-go zone because it’s riddled with 'a significant number' of man-eating bull sharks of all sizes."

Read more about it here and see the video:
http://golferpacific.com.au/process/myviews/golfpac_article.html?articleId=1323

A bit about Bull Sharks: One of the deadliest sharks off the East Coast of Australia, the bull shark is well known for its unpredictable, often aggressive behavior. Unlike most other marine sharks, bull sharks tolerate fresh water. They can travel far up rivers. As a result, they are probably responsible for the majority of shark attacks on humans that take place near the shore.

Funny enough, I have a two-for-one pass to golf 18 holes at Carbrook any day of the week and it's just 30 short minute drive south of our house!
Posted by Mike at 4:28 PM