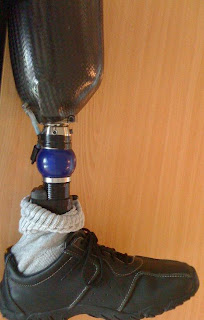 I received my long-awaited new socket on Thursday.

The Good:
As prosthetic leg sockets go, this looks sweet! The weight of the carbon fibre is significantly less than my old white plastic job. It's also not nearly as bulky under my jeans at work either and looks awesome when I wear shorts.

The Bad:
It's the wrong size... in fact, it's slightly larger than my last one. It was meant to fit me like a glove and instead fits like a large garbage can. They've packed it with some foam and promised to make me a new one, but it means more waiting and walking on something that isn't right.

Staying Positive:
It's discouraging but at very least the shape is better than the last one. Even though it's still huge, it more closely matches the shape of my leg than the last one so when I pack it full of extra padding, it's at least a better shape. I guess that's an improvement.

It also means that in a month, we'll have TWO old sockets to experiment with for new climbing leg designs. The socket was always going to be the hard part to source. The rest is just machined aluminum which we've already worked out. I even have a prosthetist contact now (outside of my treatment) who's willing to help with the design. All big bonus points.
Posted by Mike at 3:04 PM