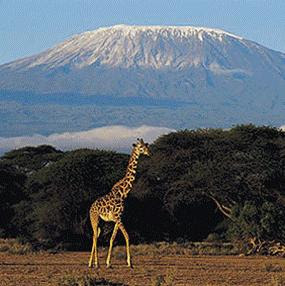 Wednesday marks the first anniversary of my accident.

Kilimanjaro means "shining" or "glittering" mountain in Swahili and is one of the world's so-called "Seven Summits" of mountaineering, referring to the highest peak on each continent. The summit stands nearly 6km above the surface of the earth and its snowy peak is an equatorial anomaly.

We have chosen to take the Machame route as our guide up the mountain. The route takes 7 days but has a greater chance of success as there is more time to acclimatize to the extreme altitude. We travel with an experienced guide and a slammin' camera.

I've been told varying statistics of people who actually make it to the top ranging from 1 in 10 on the low end to 5 in 8 on the upper end. Some of the fittest people in the world are air-lifted off the mountain each day due to the effects of altitude sickness. It's impossible to predict based on age, sex or even physical condition.

I desperately want to make it to the top of course, but I'm keeping my expectations in check. It's about the journey and the experience, not the summit. This is about marking how far I've come from that hospital bed, not ending up in another one. I'll be making daily assessments of my condition and won't do anything to put us in jeopardy.

The plan, if all goes well, is to make our summit attempt on October 10th (day 6). We'll begin the strenuous 17 hour trek to 19,340 feet or 5,895 meters, starting out from the Barafu summit base camp just after midnight. The temperature should be around -23 degrees Celsius (-10 F) and we'll do the majority of the steep climb in the dark.

It will also be my first attempt to walk in snow on a prosthetic leg, but hey I'm Canadian, it's in my blood.

With me I have a list of names of every person who has helped me through this last year: my friends, my family, my support network, etc, right down to "Wally, the friendly dude who sold me my hiking boots". When the going gets really tough, I'm going to read that list to keep me going, assuming I'm not insane from oxygen deprivation.

I honestly don't know how we'll do, but I hope to have the courage to keep plodding along when things get really tough. I'm going to take it one step at a time, one foot in front of the other.

I'm prepared for whatever comes, but if they take me off this mountain, it won't be for lack of will, I can promise you that.


Note: This post was pre-written and pre-scheduled to be published, so unfortunately I will be unable to respond to your comments at this time. I'll respond when I return!
Posted by Mike at 6:00 PM