CERN and the Big Bang 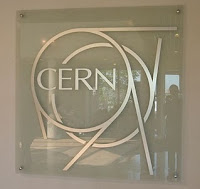 I had some free time this weekend which is a nice change of pace from the norm on these trips.

So where does a nerd like me go on vacation? The Large Hadron Collider at the particle physics research laboratory at CERN, in Geneva, Switzerland, of course!

CERN was founded by some of Europe's leading scientists shortly after the bomb was dropped in WWII as a Nuclear research laboratory with the aim of "doing some good" with the "terrible knowledge".

Over the years, CERN has written the book on particle physics with wide reaching applications for mankind. Everything from PET Scans (Positron Emission Tomography: used alongside CT scans to help doctors evaluate how well organs are functioning) to the creation of superconductors in ultra-high voltage motors, oil and gas production, etc. 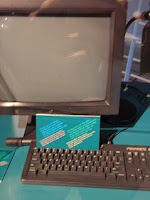 CERN even made this blog post possible. When Tim Berners-Lee, a scientist at CERN, invented the World Wide Web (WWW) in 1989 as a means of sharing information with other scientists around the world, his invention was called "vague.. but exciting". On April 30, 1993, CERN announced that the World Wide Web would be free to anyone, with no fees due, changing the way we learn about and see the world around us.

Their latest effort is called "the Grid": thousands upon thousands of computers working cooperatively in tandem to crunch about 10 Petabytes (1 petabyte=1000Tb) of data every year, instantly sharing the results with the international community. To put that in perspective, that's the equivalent of 15 million CD's worth of data, a line that would stretch 15 km long when stacked on their THIN side! 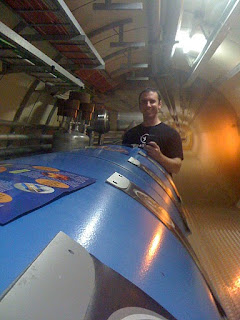 After admiring the computer that was used as the world's first "web" server, I was allowed to enter the "Atlas" particle detection unit of the Large Hadron Collider!

The LHC is a huge proton accelerator that stretches 26 kms around and is burried 100m below the surface of the earth. Particles are accelerated in opposite directions to near light-speed by huge magnets in the tubes. Once the particles reach the appropriate speed, they are put onto a collision course with one another.

The resulting catastrophe yields particles that haven't been created since the big bang itself, allowing scientists to observe Quarks, Gluons, Muons and Bozon particles (ie. the particles that make up atoms) via huge arrays of particle detectors in the collision chambers.

The LHC came online with some controversy as theories abounded that microscopic black holes could be produced during the collisions, instantly consuming the earth. Not to worry, if Einstein's theory of relativity is correct, we have nothing to worry about. If he forgot to "carry the one", well... so far, he appears to have been right! 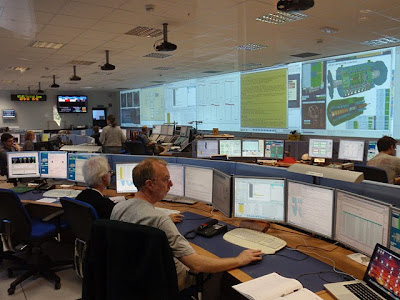 This is the control room of the Atlas chamber of the LHC. The software they're using looks suspiciously familiar to what my company produces. Sure hope they had reeeeeeeally solid commissioning standards and UAT! 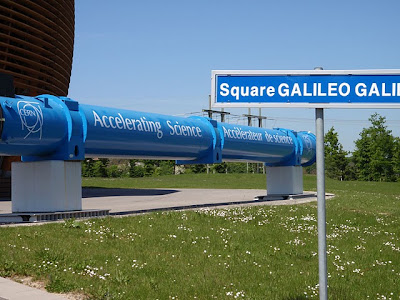 A section of the LHC outside the Atlas experiment.
Posted by Mike at 8:10 PM