Attached here is the story of a truly inspiring individual: a golfer from the Dominican named Manuel De Los Santos.

Here's an excerpt from the short documentary description:

"Manuel de los Santos is one of sport's most inspirational figures. Growing up in the Dominican Republic, he played baseball from a young age and by 2003 was planning to turn professional. But a motorcycle accident changed his life forever when he lost his left leg above the knee.

Following this accident, he moved to France and on seeing the film, 'The Legend of Bagger Vance', he was inspired to take up golf. Now 26 years old, Manuel lives in Paris and plays to a handicap of just three, competing in high profile tournaments all around the world. His extraordinary golf swing has become instantly recognisable.

Peter Montgomery read about Manuel at the end of 2009 and had the idea of making a film about him. This short documentary portrait is the result."


or by clicking this link:
http://www.youtube.com/watch_popup?v=aw-nt0eTb2w

His balance is astounding. It's difficult to bend on one leg like that, let alone hold a perfect golf stance.

Thanks to Brian for sending this.
Posted by Mike at 7:00 AM 4 comments:

When I first started down the mountain, I felt nervous and unsure...

You might imagine the mechanics of snowboarding with a prosthesis are a little different. At first, I thought so too. Most of this comes from the natural body position shift from what a proper stance would be to what I felt my leg required.

My bindings were still set to a front foot angle and my leg felt like it was being twisted out of place slightly (I haven't decided if I'll change that for next time to bring my foot more in line).

Wearing a knee sleeve to increase my socket suction also left my knee feeling slightly immobilized at first, meaning I had to consciously decide to bend it and flex against the tight silicon (I wouldn't change this set-up due to the stability it granted).

My speed was picking up and my edges were threatening to catch. The feeling of the hill was familiar but entirely foreign at the same time. I couldn't tell what was going to happen next but I didn't feel like I was entirely in control of the board. I tensed up.

Yep, I made the same mistake every beginner makes (and I'm constantly harping about) of taking my weight off my front foot, leaning away from what was making me nervous (the steep slope) and centering my weight over my back foot, making it impossible to steer. Translation: I wasn't attacking the hill, I was being a wuss.

I reviewed the footage of the first section of the descent from my trusty photographer and recognized my Bambi-like form.

Time to strap in and suck it up. Put aside the fear and figure it out. Besides, I was wearing a helmet, what could go wrong?

I got up again and shifted my weight forward over my front leg. I followed my own advice and bent my knees more, leaned harder into the turns and most importantly, relaxed enough to let the board do it's job. I reminded myself that falling is fun when snow's involved, then leaned forward and attacked the hill, just like old times. 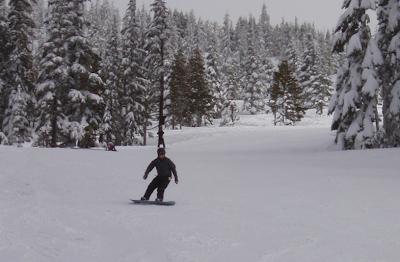 By the end of the first full run down the mountain, I was feeling like myself again, nearly back to old form. We did at least 5 more long runs and I felt fantastic, each one better than the last. 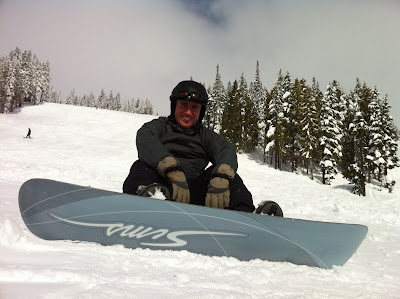 Overall, I had a great first day back to snowboarding.

The muscles in my lucky leg need shaping up and I did have one small problem as the day went on as all that cold activity meant I was shrinking inside the socket, making the board harder to control.

Rather than risking a big crash, we decided to leave it on a positive note and went in about an hour before closing, tired but entirely satisfied and grinning ear-to-ear.

After many long months wondering and worrying about whether I'd still be able take on my favourite pastime, the time and opportunity finally came this past weekend.

From the day I woke up in the hospital it's been a creeping thought in the back of my head. A quiet, cruel teasing thought of "what if I can't do it anymore?".

Outwardly, I told everyone that snowboarding would be simple with the prosthetic as both legs are strapped to the same device, giving me a sort of "helper" control surface from my good leg.

Internally was a different story.

To snowboard properly most of the weight has to be on the lead foot; my lead being the prosthetic leg. Would that hurt, bouncing over the bumps? What about leaning downhill on the leg? Would it twist inside the socket from the motion of the turns? What about edge control, stopping power, the fact that I can't pull back hard from my ankle and toes to make an aggressive turn or correction when I need to (tree avoidance)? What about recovery if I catch an edge?

What would it be like to be an amputee with one fake leg and one broken one? What sort of crutches would THAT take? What if I broke my bad leg, up high? Would that change my shape and socket fit?

Yep, I fell deeply into the trap of my own mind, overthinking and overprocessing, growing more fearful as time went by.

When I was a kid and snowboarding was in its infancy, I was a pretty average skier who hated having to constantly dodge out-of-control boarders. Even the boards themselves looked dangerous: flat on the backside and shaped like nothing more than a wide ski, using thin plastic straps and Sorrel snowboots to hold the heavy thing on. No shaping, no elevated tail, no flexibility. People were being taken away from our local hill by ambulance, bloody and broken.

Naturally I wanted to try it!

One cold winter afternoon, I impulsively (and permanently) traded my new Atomic skis/boots/poles straight across for a crappy, beaten-up Burton with a broken tail and a badly fitting pair of old Sorrels on the slopes of the Innisfail ski-hill, much to the disbelief and irritation of my Dad. He wasn't so much upset I had traded, he just figured I could have done better on the deal.

I never looked back. To me, this was a good trade! I've been snowboarding ever since, even in Australia. This is more than a hobby to me. This sport partly defines who I am, how I grew up and who I want to remain.

So, the time came to strap in and suck it up. Put aside the fear and figure it out.

It was really odd at first but it was only a short run from the parking lot to the lift ticket stand. I wasn't sure how to get up on the board and when I did, I felt like I couldn't steer. I managed to stay upright but decided a helmet would be my first purchase of the day.

The next worry was the lift. Having a board hanging off my prosthetic all the way up the mountain and being totally out of control when I got off wasn't going to be pretty. I took my board off and quickly explained to the lifty that, for the safety of the skiers under the chair, it was best that I hold my board in my arms. He agreed. 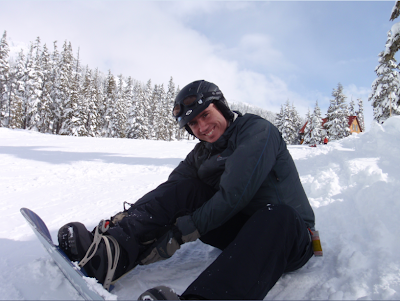