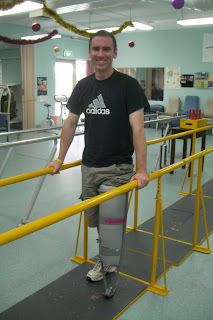 I went in for my first official clinical rehab appointment on Thursday morning. This was great!

Up to now, I've only had physio appointments from a mobile physio whose job it was to make sure I was stretching and strengthening my atrophied muscles. This wasn't what you'd call a good match. The rest of her clients were generally (a) not amputees and (b) born sometime around the second world war. It was a very low impact workout.

Thursday's clinic rehab was excellent. The people there deal exclusively with rehab for amputees and really know their stuff. It was refreshing and exciting!

Other than some other less exciting but necessary exercises, the highlight was the Airbag training. As you can see in the photo, a very long cylindrical "donut" is inflated around the end of my leg, sitting inside a steel cage. Air pressure and friction hold the apparatus firm around the outside of my leg and I can walk/stand on the end of this. 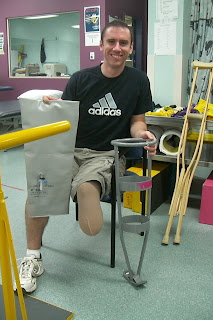 It was nice to be upright without crutches. My whole back breathed a sigh of relief and my hips felt better too. It's not quite like walking for real yet, far too squishy, but this is the first step in a chain that includes getting my interim leg, then my definitive leg, so I'm glad to be (finally) on my way towards that.

The bag is meant in theory to give me the "impression" of what it will feel like to swing a prosthetic leg through as well as supporting weight via the pressure on the outside of the leg rather than on the tip/end of it.

My physio therapist at the clinic is a great lady who's travelled the world, including seeing Canada coast to coast. Funny how she's seen much more of Canada than I have and I've seen more of Australia than her! She's also dealt with amputees since she was fresh out of university 20 years ago.

She introduced me to Mark, another person like me who can only count up to 15 now. Mark was hit on the street by a drunk driver when he was 21. He fought back and has been surfing on the pro circuit ever since! He told me he didn't quit because of his leg, just his "old guy lungs" kicking out on him when he's trying to hold his breath underwater!

The best part about this injury may very well be the inspiring people I get to meet, talk to, etc. I'm pretty lucky!
Posted by Mike at 7:55 AM