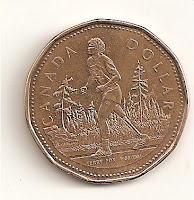 The letter that accompanied this coin not only gave me strength, it solidified my resolve to get back to life and to live to the full extent of what "living" really means.

That's because this isn't just any Loonie. It came from an excellent friend. It's been used to inspire determination in someone whom I respect very much at a time he needed it most. It bears the image of his hero: Terry Fox.

Terry Fox is a Canadian icon whose Marathon of Hope has raised over $400 million for cancer research. Terry lost his leg to cancer at the age of 18 but vowed to collect $1 from every Canadian for cancer research by running across Canada. He intended to run 42km each day, the length of a full marathon, until he reached his goal.

From the foundation website:
Terry trained for 15 months, running 3,159 miles, running until his stump was raw and bleeding, running every day for 101 days, until he could run 23 miles a day. He took one day off at Christmas, only because his mother asked him.

Once, just before Christmas, when he had run only a half mile, the bottom half of his artificial leg snapped in two pieces, and Terry crashed to the pavement. He picked up the two parts, tucked them under his arm, stuck out his thumb and hitch-hiked home. There, he clamped the two parts together and ran another five miles.

After 18 months and running over 5,000 kilometres (3,107 miles) to prepare, Terry started his run in St. John’s, Newfoundland on April 12, 1980 with little fanfare. Although it was difficult to garner attention in the beginning, enthusiasm soon grew, and the money collected along his route began to mount. He ran 42 kilometres (26 miles) a day through Canada's Atlantic provinces, Quebec and Ontario.

However, on September 1st, after 143 days and 5,373 kilometres (3,339 miles), Terry was forced to stop running outside of Thunder Bay, Ontario because cancer had appeared in his lungs. An entire nation was stunned and saddened. Terry passed away on June 28, 1981 at age 22.

The following is an excerpt from Terry's letter requesting support for his run called "The Marathon of Hope": 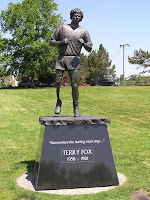 "The night before my amputation, my former basketball coach brought me a magazine with an article on an amputee who ran in the New York Marathon. It was then I decided to meet this new challenge head on and not only overcome my disability, but conquer it in such a way that I could never look back and say it disabled me."

That's the choice we all face when we come up against a challenge that seems insurmountable: we can lay down and give up or we can stand up, dust ourselves off and play the hand we've been dealt to the best of our abilities. Sometimes that's going to take a little extra problem solving and some extra determination but we all have the ability within us to achieve.

I won't forget Terry's legacy and I'll keep this little reminder with me for the days those challenges seem overwhelming. On those days, I'm going to look at my Loonie, man-up and remember to just keep putting one foot in front of the other.