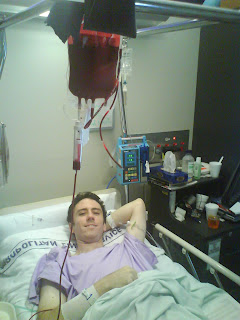 During my time in the hospital, a common theme was people wanting to help me in any way they could. I wanted to let them help but I didn't know how. Afterall, you don't need much when you're in the hospital. As you can see from my last post, they found ways to help me anyways.

The constant offers got me thinking: what could I use this army of volunteers for? Was it time to unleash my plans for global domination? Nope... probably need more people for that. Not enough people to create a nice sized cult either... at least, not one that would pay very well. I could start my own religion but... too hard to pick a deity and "follow me as your god" just sounds arrogant...

I wrestled with this one for a while until one day it came to me. I was receiving (at least) my 13th unit of blood (not counting the blood I would have received during any of the 11 surgeries or on that first night). The following is the email a friend of mine sent out the next morning:

As you know, Michael MacKenzie was involved in a serious accident. In response to the question “What can we do to help?” he’s asked that people consider donating blood to replenish some of the stock he's used. Someone’s donation has saved his life.

Rachel from the Red Cross has offered to do a free pickup of anyone who’s interested in donating blood. I’m suggesting that we go and give blood on: Friday 14th November, 10am pickup. Please let me know if you are coming so I can let Rachel know how many people to expect. 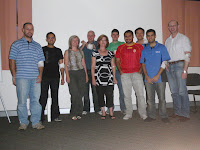 Thanks to his efforts, 11 people went in to donate that day! They sent me this picture (not all stayed for the photo) afterward. You can click on the photo to see a larger version. Notice the flash arm bandages!

People still tell me that if there's anything I ever need, just ring. If you're one of those people, maybe you could donate blood in your community to help me pay back some of the karma I owe. I won't be eligible to give for some time so until then, I have to rely on my friends and family for my payback.
Posted by Mike at 3:45 PM