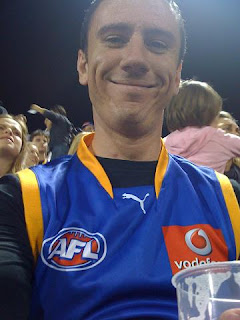 This posed some really interesting challenges for me so I thought I'd blog a little bit about it. Also I haven't blogged in a while and it's good to let the family know I'm alive and ticking!

Aussie Rules football is very different from any other game I've ever seen. For one, it's probably football match played in a giant oval! It's also one of the only games on earth where you can score a point by missing your goal kick. Sort of a nod to "heeeeey... that was... um.. clooose... here's a pity-point!"

It's an extremely athletic game played by no less than 36 players on the field and 8 umpires. The players jump as high as pro-basketball players, run as fast as the fastest soccer players, hit as hard as the toughest rugby players and have the grace of a major league outfielder when catching a ball under pressure. 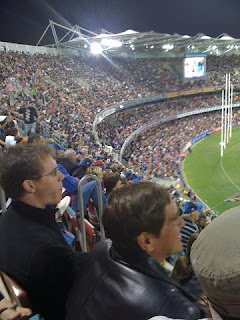 You don't need to watch the ball for the action as there's at least three other games being played away from the ball at any given time, jostling for position and moving the chess pieces around the field.

The game never stops action. A whistle doesn't mean "stop what you're doing", in fact it means "play on!". This makes the fans some of the craziest viking-like fans on the planet. It's easy to get caught up in such a fast paced game with so much action!

Oh yeah, my personal challenges for the night:
- climbing the steep stairs of the Gabba to my seat
- navigating the steep stairs holding two beers instead of a railing
- shuffling past feet in the aisles to get to my seat, trying not to fall on anyone
- bumping around in the crowds after the game
- standing on the bus ride home for lack of a seat

It was a good test. Often the subtle movements are the hardest to control so squeezing one foot in front of the other with so many feet in my way, without spilling a drop of beer, not so easy!

We had a good night. Brisbane beat Adelaide 119 to 83 and Daniel Bradshaw (#18) beat the all time Lions scoring record with 461 goals. 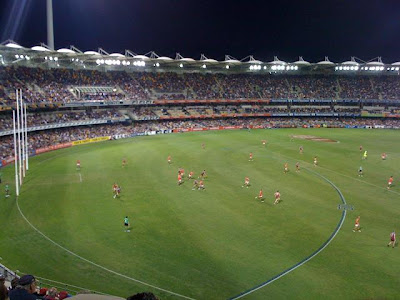