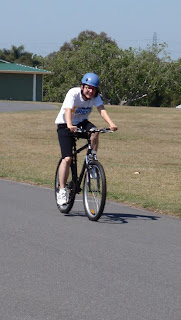 "If God invented marathons to keep people from doing anything more stupid, the triathlon must have taken Him completely by surprise." - P.Z. Pearce

In preparation for the big camping trip in October, Sunday was pack-training day. Normally this would include a very long hike with a 10kg (22 lb) pack, but that's been getting too easy. Instead, we completed a mini, home-grown, out-of-order triathlon!

We started off doing a few hard sprints on the bike around the cycling track in Morningside to get the legs good and sore. The mid-day Brisbane heat was a killer, the seat was far too low to get a good power stroke and the rock-climbing helmet I was sporting didn't breath quite as well as a regular cycling helmet but the ride was successful.

My foot stayed on the pedals a lot better this time and my new socket is cut low enough in the back to really give me the flexibility I need on the follow-through, making for a good ride. 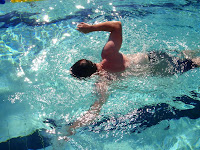 From there it was off to the swimming pool to get in as many laps as possible in an hour, accounting for 15 minutes of treading water, a quick shower after and some pre-swim fun of freaking out the normies when I popped my leg off poolside.

My flutter kick was tighter than ever and I had a strong stroke so I really think my form is improving. I was quite happy with myself when I caught up to the lady in front of me and had to tread water to let her get some distance before starting again. Granted I think the woman I was "racing" was in her 60's but you have to start somewhere! 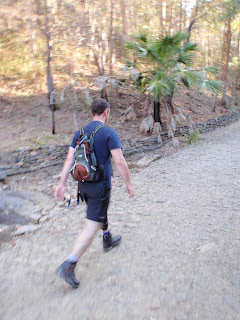 I had a quick and awkward shower doing my best to to keep my leg dry, then we began the long hike up Mount Coot-tha via the Slaughter Falls track. The 10kg pack felt especially heavy as my muscles were dead tired but it was a good test. The trail is steep and very uneven which makes pack-training all the more difficult for balance and stabilization on the springy foot.

After last week's out-of-control hike down the same track, my prosthetists and I decided to remove the "running wedge" from my flex-foot, leaving the heal very soft. This made a WORLD of difference coming down the steep slopes, allowing my ankle to flex my foot to the ground for maximum traction. The trade-off was the extra energy required when going up the steep slopes so I might just start changing my foot position depending on the day's requirements.

We made it back to the car just before dark, in good time. My lend was really aching but I deserved it -- I had refused to sacrifice time "socking-up" during the descent.

The real test of the last month's worth of training came today: no sore muscles even though they were pushed hard yesterday. I'm very pleased!
Posted by Mike at 4:31 PM