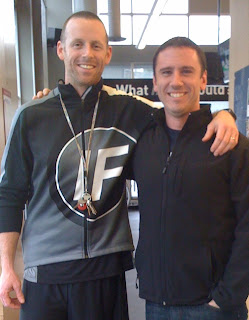 I was having a busy day today renewing my Canadian license, taking care of a passport issue, gorging myself on Sugar Crisp cereal and guzzling A&W Root Beer (small comforts of home) when the thought dawned on me that I should swing by the fantastic new Innovative Fitness location in Port Moody to meet Meyrick Jones face to face!

For those who are just joining us, Meyrick has been an inspiration to my whole family ever since my Dad met him at a road race, two days before my last operation. At the time, he graciously offered to help me "get my feet under me" again. It took some time before I felt ready to contact him (several weeks after the surgery) but once I did, I found him to be chock full of information and support.

In a classic "it's a small world" act, some friends back in Victoria, Shannon and Cliff, sent out a DVD of Meyrick's interviews with Cliff's brother who is doing his prosthetics apprenticeship, not knowing that I was already in touch with him. It was a welcome gift as the video clips weren't posted to YouTube for some time after that.

Meyrick and I have continued to stay in touch and I really respect his opinions on life, my recovery and fitness in general. I posted an article on swimming that he and I collaborated on when I was still on crutches and trying to find some cardiovascular activity.

Meeting Meyrick in person confirmed something that I always knew: he is a truly genuine, nice guy!

As short as it was, it was absolutely awesome to finally meet, shake his hand and check out his new gym in person. The facility exudes Meyrick's own passion for elite sport and fitness.

Next time I'm on the continent, I'll definitely take some time out to plan a horrendously long hike with him so I can pick his brain a lot more! Thanks for everything Meyrick.

*note: this post has been back-dated to the intended post date due to a technical issue encountered on initial attempt.
Posted by Mike at 9:53 PM