In the beginning... (the conundrum) 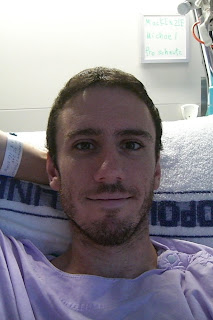 It seems easy now looking back to say that I made the right decision, however, human beings aren't wired in a way to say "yes, thanks... hmm... good menu here... tell you what, just use a small power saw to cut one of my limbs off."

Let me step back for a minute to say this: I was lucky.

Yes, lucky. Not only had I survived a short flight through the air, landing on my head, flipping a few times and coming to a rest in the middle of the oncoming traffic lane, I had done it without any internal bleeding or spinal injuries. Many have not been so lucky. Sure, my foot was laying beside my body instead of being attached to it but I was alive. It was only after I watched the first spurt/gush of blood leaving the end of my ankle that I became certain of my impending death.

I woke up very suddenly and very high on ketamine to an emergency room doctor who was telling me I would need an amputation later that night. I refused, citing an episode of M*A*S*H where either Hawkeye or BJ managed to save a soldier's leg by taking an arterial graft from one leg and wiring it up inside the damaged leg. He must of seen that one too because I woke up the next morning from surgery with a metal hat-stand coming out of my leg and grafting surgery on the schedule, but it was my leg, in tact, nonetheless.

Surgery numbers three through eleven were known as "wash outs", not nearly the soap and water treatment the name brings to mind. Instead, I went under while a team of surgeons would open me wide and cut away dead and dying soft tissues such as muscles, tendons, etc. Here I thought soft tissue was just connective tissue between the important bits. Little did I know.

The problem with "wash outs" is that there's a limited number of these they can feasibly do before they've gone and cut away all the working muscles/tendons/etc. This leaves the patient in a tidy little predicament: how long does one let this go on before they accept the inevitable? I chose to give Lefty every chance at life that I could, so I opted to keep taking the surgeries.

But as with any real life situation, that's when it got REALLY tough. At the point that Lefty was saved, he was a changed, shell of a foot. Sure he could live... I just had to agree to having my entire lat dorsi muscle removed from my back to be wrapped around Lefty like a scarf, robbing me of rock climbing as a sport but providing Lefty with a blood supply and leaving him horribly disfigured.

Lefty would never wear a shoe again, be able to walk up hills, be able to walk on uneven ground, snowboard, run, jump, fit into socks or live without constant pain, but hey, it would be my own flesh and bone down there still...

On the other hand, I could opt for taking a stunt double in place of Lefty. One made of carbon fiber that would let me run, jump, rock climb, snowboard, scuba dive, ride a bike, drive, walk up/down hills, etc. Best yet, my lat dorsi could stay where it belonged and I wouldn't be coming back to the hospital for countless reconstruction surgeries for the muscle flaps.

They told me it would cost an arm and a leg but they didn't know who they were dealing with. I bargained them down to just one leg... suckers.
Posted by Mike at 12:39 AM