In the beginning... (life in the hospital) 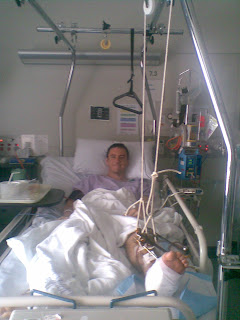 I arrived home from the hospital on November 21st, 2008. I was glad to be out but already missing the room service.

In a text message to my sister back home on being in the hospital, I said I'd had an "ok time but the waitresses kept sticking their fingers up my butt." At least I got breakfast in bed, bathed (in bed) by exotic looking women and I didn't have to get up to pee in the middle of the night! Ah yes, the hospital...

Since then I've realized that I have a long gap in my year (mentally) and I need to fill that back up. October 7th happened, then November 11th, then November 21st. Nothing happened in between.

Nothing, that is, unless you count the eleven surgeries, several transfusions, being threatened with death in the middle of the night from two separate hallucinating old men in the bed next to me or having a strange old lady pour out her water jug and cackle to herself about how she'd "get those nurses next time, now they'd slip!" In the old woman's defense, the nurses in question were in fact (in her highly unqualified opinion) international terrorists in the middle of a conspiracy to kill all the patients on the ward.

Back at home, Lisa was fighting her own battles: namely, coming face to face with a spider the size of a small community. A massive and (mostly) harmless (she says deadly) huntsman spider. Now, most locals would tell you it's "good" to have a huntsman spider the size of a grapefruit in your house as they keep other pests away and it's true: cockroaches, flies, mosquitoes, other more deadly spiders, etc, are all kept at bay when the "noble" huntsman roams free around your home.

This is either because:
a) the huntsman kills/eats them all or
b) (my personal theory) they're all just as freaked out by the appearance of a spider the size of a woolly mammoth rolling around their domain as we frozen canucks are, so they back away slowly, calling him "Sir", and leave the premises with stern warning to all their friends not to go in there.

With the designated spider slayer laying incapacitated in the hospital, Lisa arrived home one evening to see the great beast perched on the wall directly over the bed where she had previously been planning to sleep for the night. Armed with a binder, a large kitchen knife and a shotgun for safety, Lisa approached and bravely slew the nasty man-eater who was momentarily distracted from his meal of three small cattle to briefly envision his own gruesome death. Splat.

Don't wish to ruin the ending but we received our first cockroach (the size of a jumbo jet, but I'm not one to exaggerate) about a month later... and no, the two hallucinating old men in the bed next to me weren't in the bed at the same time, nor were they a hallucination. The "terrorist" nurses turned out to be completely normal and in fact very sweet once the old woman was moved to another ward for special people like herself.

Final thought: The most important and best thing I'll remember about hospital life are the connections I made with family and friends. This was one long, bumpy ride and those who chose to come along will have my loyalty and friendship for life (whether they like it or not). I wouldn't have kept my questionable sanity without you.
Posted by Mike at 11:27 PM