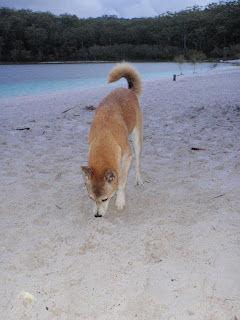 The Easter Bandicoot was good to us this year. Instead of chocolate, he brought us Sheryl and Steve, our good friends from Canada!

This called for some extreme tourism and thus a weekend on Fraser island, just off the coast of mainland Australia.

Visiting Fraser comes with some great benefits, namely, the fact that you need a 4WD with a snorkel to get around. The snorkel comes in great for crossing Eli creek on the East side of the island. When you're not driving down the beach or crossing streams, you're bouncing around the sandy 4x4 inland tracks.

As an added bonus, December's cyclone washed away parts of the passable beach, leaving a rocky moonscape to drive around on. The deep holes and steep climbs over slippery black lava rocks made for a great time!

It was like 4WD Fantasy Camp for Yuppies. We had a blast and the grins haven't faded yet!

My own personal accomplishments for the weekend:
1) Driving a manual transmission (my first post-op clutch).
2) Hiking in sand, very uneven and quite a challenge.
3) 5km trail hike in the middle of the island near a spot called Central Station.
4) Not rolling Chuggers (our 4WD) on the wet rocks of the washed out beach.

* I've only had my new leg for three weeks so the 5km hike and sand walking were both a big deal to us. The manual clutch was a pure bonus!

Swimming in Lake McKenzie was fantastic at the end of a great day of 4WDriving. The water was crystal clear and warm as could be. A couple of dingos even graced us with a little wildlife adventure on the shore at dusk.

- The original name of the island is "K'gari". It means paradise.
- Fraser island was inscribed as a World Heritage site in 1992.

We couldn't have asked for a better crew! Even "Chuggers", our 4WD, held off breaking down until after the trip was over when his battery went entirely dead for no reason during a quick stop at the carpark after we got off the ferry and back to the mainland. A quick rolling start / clutch pop got Chuggers rolling again and we managed to get him back to his home at the rental shop. 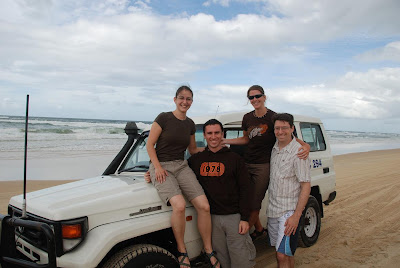 Photo: The crew with "Chuggers" our 4WD on the Eastern beaches. 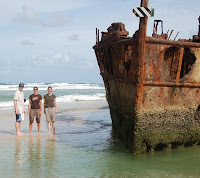 Photo: The Maheno, a shipwreck used by the RAAF in WWII for bombing practice.
Posted by Mike at 11:45 PM