Loren versus the "Lend" 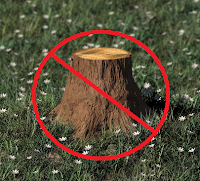 When I first became aware that I might have to pull a "return to sender" on my left leg, I did a lot of reading.

One word that I utterly HATED was "stump". Like most people, I think in vivid pictures so when I heard that word, I imagined a lumberjack with a bloody chainsaw standing over my screaming torso. Not a nice image!

At the time, the word brought to mind something gross, bloody and hacked up and was synonymous with "mutilation".

I suppose I eventually came to accept the word as part of my regular vocabulary because every doctor, physiotherapist, prosthetist, etc insisted on using it. The doctors seemed to think that using single syllable words made them more accessible. For some, I think they did this is in lieu of having to work on their bedside manner.

Since then, I've had the good fortune of doing some peer-counselling in the hospital for other young new amputees. In every case I've encountered objections to using that word but no one had any good suggestions for an alternative.

Enter Loren, a recovering above-knee amputee who I had the absolute pleasure of meeting on Monday. With a big smile and a stern warning, I was told never to use the "s-word" again. Instead, I promised Loren that I'd spread the word to adopt the word "Lend" (Limb-End).

So here you go Loren, this one's for you! I've already confused a few prosthetists one physiotherapist and one super-doc this week on your behalf. By the time you get to rehab, I hope the "s-word" will be a distant memory and entirely taboo. I admire your courage and I wish you the very best recovery possible!
Posted by Mike at 11:03 AM