The Revolution Will Be Prosthetized (IEEE Spectrum) 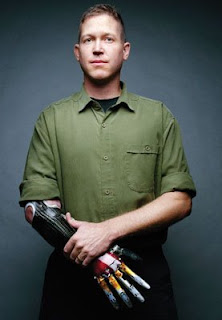 This is seriously cool! Imagine having a prosthetic arm and still being able to feel sensations through it like heat or textures. It's one of those cases where the truth is stranger than the fiction, and the truth absolutely blows my mind.

I saw this article in the IEEE Spectrum hard-copy and thought I was going to have to re-write it here word for word until a quick google search found the exact same article online.

A few teaser excerpts:
"...research is part of a nationwide effort to create a neurally controlled prosthetic arm. That arm has been the focus of much media attention, but that focus obscures the truly groundbreaking research typical of the Revolutionizing Prosthetics 2009 (RP2009) program.

The U.S. Defense Advanced Research Projects Agency (DARPA) is pouring at least US $71.2 million into the program in the hope that it will let amputees do what most people take for granted: make gestures, test the water in a teacup, turn a key, even peel the shell off an egg. Words like bionic and thought-controlled have been thrown at the project, but they don’t do justice to the sheer ordinariness of its purpose. DARPA isn’t looking for a superstrong “Six Million Dollar Man” arm; it just wants an arm that moves exactly like a real one does."

Canadian connection:
"In October, a Canadian hospital announced that it had used part of the control mechanism of the DARPA arm to steer regular, nonrevolutionized prosthetic arms in two patients. Simply borrowing that one technology has made huge improvements in commercially available prosthetic devices."