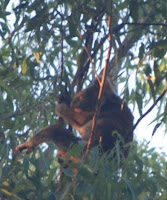 Last Saturday we had a very welcome couple of visitors arrive. Nope, not another huntsman spider -- that was a few weeks ago -- this was my Dad and Verle from Canada!

After a very long flight, we picked them up from the airport and got them settled in at home. Maybe they were just delerious but they actually seemed to have some energy left! Must've been that last round of ice cream on the airplane. We expected them to be weary and need some time to recover but they were eager so we took them for an evening hike near Daisy Hill. 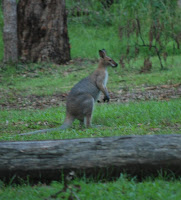 On the first day we were all treated to a Koala in the wild, having a light snack high in the red gum tree just before sunset!

We also spotted a Wallaby in the forest, two big Kangaroos in a field and several white cockatoos flying overhead before the sun set on the day. We also spotted several huge Golden Orb spiders overhead in the dusk.

On the way home, we watched the giant fruit bats and flying foxes make their nightly migration in the hundreds (perhaps thousands) overhead just south of the city. Quite a site to see (and smell)!

They were in travelling-Canuck bliss and you read correctly, that was just day one. A hard act to follow! 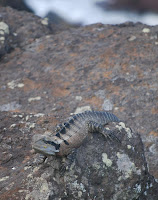 Not to be outdone, day two did not disappoint. At Byron Bay we were treated to the site of a small band of wild dolphins jumping three in a row out in the surf!

We also spotted several large water dragon lizards on the cliffs overlooking the surf at Point Danger and watched wild surfers competing for bragging rights at the local competition that day.

Lisa took them for a great hike near Montville on Monday where they spotted a huge frog on the side of the hill nearby to a raging waterfall and Tuesday was spent exploring the city. We've had a lot of rain lately so the falls were very impressive to see!

This morning we dropped them off at the airport for a 6am flight out to "Aires Rock Airport" at Uluru and the 42 degree Outback.

I've been fussing around like a concerned parent making sure they pack and drink plenty of fluids at "the Rock", know to leave snakes alone and not to feed the dingos! It's really more for selfish reasons: it would just be embarrassing if they were the first tourists to die this year in a place so public as Uluru!

They'll be back for another visit before they head back to Vancouver in a few weeks. I can't tell you how great it's been seeing them! 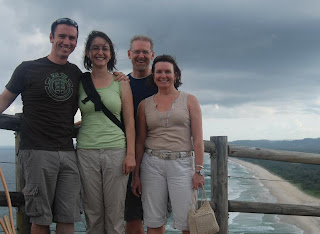 For an encore, I'm hoping to receive my first prosthetic before they leave. I have now gone through the casting process and I was told today that the leg is being built as we speak! For some reason they laughed when I suggested they work through the night...

My new foot is on order and should be arriving sometime early next week. Here's hoping I won't have to be patient for too much longer, but in the meantime, these visitors from home are an excellent distraction!
Posted by Mike at 7:20 PM