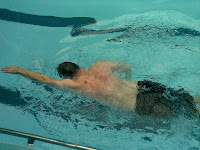 The following is a conversation that took place between myself and Paratriathlete Meyrick Jones on swimming. With Meyrick's help, I'm swimming MUCH faster now and have worked out a few kinks with my new style. Perhaps best of all is the fact that I've realized my swimming was probably just as bad with two legs as it was with one; I'd just never paid enough attention to my feet until now. Maybe you won't have to give up one of yours to improve your swim stroke as much as I have!

Mike:
Lisa and I went swimming twice on the weekend and figured out that when doing a front crawl / freestyle stroke, my kicking is not only useless to my speed, it's actually a hindrance! Have you found this?

MJ:
No. I find that a tight, well executed flutter kick increases my speed. It does take energy though and I tend to de-emphasize it in the same way most distance swimmers do.

MJ:
I am also faster with the pull-buoy between the legs (and so are many people). It keeps the body more horizontal thus minimizing drag. This is why my coach calls me a "cheater" when I use it.

Do your time trial without the pull-buoy - kicking hard and not kicking. This will give you the "value" of your kick.

Dolphin kick - not too bad but missing the power of a two legged kick - makes butterfly VERY hard to do for any distance.

Mike:
So basically what I can figure out is this: my stump seems to create a vortex or a drag backwards rather than a push forwards. If I let it float and kick with the good leg, I can propel myself forward. If I kick with both, I stop dead and don't move forwards.

MJ:
I tend to kick with only my right leg and the left just sort of moves up and down in time with it. You will get a rhythm.

Mike:
I'm starting to think my best stroke will be the butterfly. That combines dolphin kicking both legs at the same time together and I'd have a less awkward time breathing. Problem might be the energy expended doing such an intense stroke. Not exactly a long-distance stroke.

MJ:
Remember the kick is by far a secondary propulsion system in distance freestyle swimming. Concentrate on keeping your head facing straight down at the line (this will keep your legs higher in the water), then adopt a nice tight flutter kick. Also, don't feel bad about using the pull-buoy between your legs, unless you plan to compete who cares? BUT, watch your shoulders - if you start swimming all the time you might develop some over-use injuries - build it up slowly - like running....

Mike:
Finally got back to trying out some swimming this weekend. I tried several different types of kicking to sort out what you meant about a "nice tight flutter kick" and think I figured it out.

My main problem is that I was kicking too much from the knee. When I kick that way, I create drag. When I used more ankle and kept my knee action "tighter", I was MUCH faster in the water. I'm not sure it was so much from the extra propulsion (although I definitely felt a little push from that), as much as from thinking about what you said about the pull-buoy keeping me more horizontal and reducing drag, then applying that to my kick. In other words, I was thinking about just using my kick to keep me horizontal and reduce drag rather than as a propulsion mechanism. This helped a ton and still added a little "kick".

I have a feeling that my two legged kick was just as ineffective but no one had ever pointed it out.

MJ:
Of the three leg joints the one that should be most involved in initiating the kick is the hip. The knee will flex only slightly to help create a whip-like action and the foot should stay pointed. Check YouTube for a video of Phelps or Thorpe to see what I mean. You should aim to create a little surface splash with each kick. That way you will know you are in the proper horizontal position. To get that position and maintain it your head will need to be aligned so that your face is looking down not forward. Swimming is SO connected this way - each part effects every other part. This is all exactly the same whether you have 1 or 2 legs.
Posted by Mike at 12:32 AM